We just got some turkey poults last night. My friend sent some of her turkey eggs to another friend who had them hatched out for us. Two of the three eggs hatched. Unfortunately, one of the poults died during the night. Since we haven't raised turkeys before, I don't know if it was warm enough or not for him (or her). I also noticed a bit of 'pasting up' on his hind end. That may have been part of the cause as well. The one that died was also the weaker of the two poults. 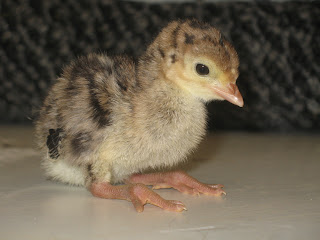 The new turkey poult that was hatched less than 24 hours ago.
We were given an adult turkey last year, but the Number One Rule On the Farm: Be Nice Or Be Tasty. Our son-in-law and daughter came and processed him for us. That was the first time our son-in-law had processed a turkey, but he is a hunter and he did a wonderful job. Yes, the turkey was tasty!

Since we haven't raised turkeys from poults before, I did a little searching to find some links on how to do it. Here are two that I found:

Poultry Pages and How to Raise Turkeys

Our turkey poult are currently inside a plastic tote with a lamp on it. Hopefully he won't be as dumb as people say they can be!
Posted by TJ at 7:23 AM

Email ThisBlogThis!Share to TwitterShare to FacebookShare to Pinterest
Labels: turkey