I wanted to explain how we milk our goats. I get emails from time to time wanting to know how we do it. Although we aren't allowed to sell our milk for human consumption (we aren't a licensed Grade A dairy) we drink and use the milk from our does. Visitors have tasted it and said it is very good. Vet2Be hates when we are not milking because then he has to drink "that nasty cow milk from the store."

I never thought I would like goat mik. I tried it when I was younger and thought it was the worst stuff I had ever tasted. Honestly, our milk is good tasting. It is fresh and creamy! I don't mind drinking it or cooking with it at all. I like knowing where some of the food we are eating comes from, too.

First and foremost is making sure that we feed the dairy goats good feed. The second thing is to make sure we are sanitary when we milk. The third most important thing we do to get good tasting milk is to cool it quickly.

Feed
Remember the saying "Garbage in, garbage out." Good feed usually means good tasting milk. Bad feed, including old hay, may mean bad tasting milk. We feed a good grass alfalfa mix during the day. We buy our hay from someone who sells hay for horses. Old cow hay may be good for cows, but it isn't necessarily what we want to feed the goats. They always have fresh water to drink, too.

We feed a mix of 3 parts sweet oats, 1 part cracked corn, and 1 part steam rolled barley. We feed between 1 and 2 pounds to each goat on the milk stand. "A pints a pound, the world around" is what hubby's grandma used to say. And it is true of grain, I use a 32 ounce beverage cup to measure out their grain into the stand feeder. We also add about 2-3 ml of Prime 90 Horse supplement to the grain mix. 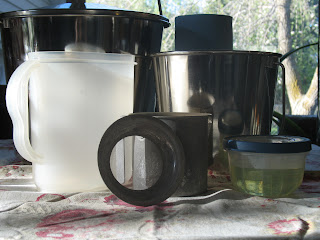 Here are the milking supplies ready to go out. Clockwise from back left: seamless, stainless steel, covered holding tank; blue shop towels; seamless, stainless steel milk pail; sanitizing solution; strip cup (screen lid is in front); and measuring pitcher. The measuring pitcher is usually filled with ice before we go out.
Milking procedure
Bring the doe in (Clover is usually first :o), give her 1-2 lbs of grain plus a mineral supplement on the stand.

Washing the doe
Wash the does udder and our hands with a sanitizing solution. We use Chlorine Dioxide, but you can also use the recipe found on Fias Co Farm. We used that for a long time until hubby started mixing up the chlorine dioxide. (It is great to be married to a chemist!) We like the chlorine dioxide because it is much easier on my hands than the bleach. I use a disposable paper towel (blue shop towels) that we get at Costco. They are a little more expensive than regular paper towels, but they hold up extremely well in the barn. Then I dry off the does udder with clean paper towel.

Checking the milk
We squirt the first 2-3 squirts of milk into a 'strip cup' to check for any abnormalities or problems with the milk. If there are problems (blood or clots), that goat's milk is not put in the holding tank, we take it into the house to check it. Striping the milk out of the teats also 'dumps' the milk that may have the most bacteria in it, so if you get rid of the first strippings, then the milk tastes better. The cat loves it, so we feed it to her!

Milking the doe
Milk the doe into a seamless, stainless steel milk pail (or we use the milking machine when we are getting more than 3 gallons of milk). We bought a Basic Milking Kit from Caprine Supply a few years ago. It has held up reasonably well. I am not too pleased with the aluminum strip cup, but the bucket and funnel have held up very well.

When the doe is done milking, we dip her teats in the sanitizing solution again to prevent mastitis. You can use something called 'Fight Bac' but our does did not like the spray at all.

Record keeping
We weigh the milk and record the amount given. Not everyone does this. But to be honest, it is a good indicator of the health of the doe. If the amount of milk goes down suddenly, there may be a problem and we can keep an eye on that doe. It also makes a good record of how much each doe gives in case we decide to sell her.

The milk is then poured into the sanitized stainless steel holding bucket that is sitting in ice water. The milk begins to cool as soon as it is in the holding bucket.

We release that doe and start with the next one.

Cleaning up in the barn
When we are finished with all the milking, we clean off the milk stand with the rest of the sanitizing solution (I don't know if this really does any good since they are standing on it the very next time we milk! But it makes me feel better!)

Filtering, cooling, and storing the milk
We bring the milk into the house and filter it through 2 filters into sanitized 1/2 gallon canning jars. I buy mine at the local grocery store. I also use plastic lids on the milk instead of the metal canning rings and lids. They are easier to wash in the dishwasher and don't rust. The filters we use are standard dairy filters that we buy at the local feed store. I also use a re-usable coffee filter on top of the dairy filter. There really isn't much in either when I'm done. I hate nasty milk or floaties, so I wash the udders really well! 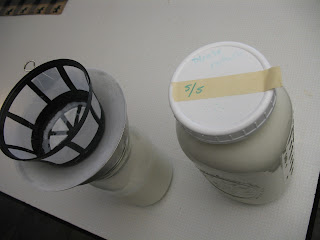 On the left you see the two filters I use for the milk. I use a binder clip to hold the diary filter in place because I lost the ring that holds the filter in the bottom of the funnel. It works better this way because the milk goes through the filter faster when the filter has a bigger surface area. The jar on the right shows how I mark the bottle with the date and any other necessary information.

We put on a sanitized lid and label the lid with the date. I use a Sharpie marker on masking tape, and tape the 'label' onto the lid.

We put the milk bottles into buckets inside the 'milk fridge' that contain ice and water so that the milk continues to cool quickly. The milk is down to 40 degrees within 1 hour (or less) of milking. Our 'milk fridge' is kept a little colder than the house fridge. The milk lasts between 7-12 days without a problem. 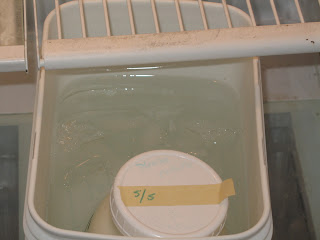 This container will hold two 1/2 gallon glass canning jars. Even when there are two containers, the milk cools off very quickly.

What we do with all the milk
We have lots of people in the area that are raising puppies, kid goats, and lambs on our milk. We bottle feed our lambs with it, too (it is much cheaper than buying lamb replacer!) Sometimes the chickens like a drink if we have extra. We also drink it, make yogurt out of it, and we make cheese out of it. I've also used it to make soap. We aren't a licensed, Grade A dairy and have no plans to be one since we don't want the expense of building a 'milking parlor' here.

We love the goats, we love the milk, and we love what we learn from having the animals here!

How interesting ...thank you for sharing this .
I am allergic to cows milk ,if I lived close I might try your goat milk and Maybe I could drink it without getting a belly ache.lol
Elsie <><

How do you make the chlorine dioxide for the udder/hand wash?

Hubby is a chemist and he mixes it up for us. It is much easier on my hands than the bleach water. I wish there was a recipe you could follow at home. I know our local dairy supply carries a sanitizing solution that contains chlorine dioxide, but we would have to buy it in a 55 gallon drum. You might check your dairy supply or local feed store to see if they have something similar.

I have a friend who uses baby wipes to wash her does udder. She loves the convenience.