Polioencephalomalacia
We've had a few sicknesses lately. The easiest one to deal with was the goat polio or Polioencephalomalacia. Basically this is a Thiamine deficiency in young goats. The kid was limping on his back left leg on Thursday so we put him in a stall with his mom. It didn't get better, in fact it was worse on Sunday. It had spread through most of his limbs and my husband said that he looked like he had a neurological disorder. Bingo! I knew what it was at that point and hubby went searching for more information.

This is taken from GoatWorld.com:

Our little guy didn't have all the symptoms (no diarrhea, no apparent blindness, no 'stargazing') but he had enough symptoms as well as enough indicators that we decided to treat him. We had treated his mom a few days earlier with a womer (Fenbendazole), it has been wet so he may have nibbled on some moldy hay, he is a single buckling on a nubian doe who gives lots of rich milk so he was growing very quickly.

This is also taken from GoatWorld.com:

We have Vitamin B complex on hand and decided to treat him with that according to the dosage requirements for the Thiamine listed on the lable. He is a 20 lb buckling so we gave him 1ml of B-complex 3x a day for 3 days. He was much better after the second dose on Sunday and is almost back to normal today. We'll keep an eye on him to see how he continues.

We have a doe that has mastitis so we found a vet that would look at her. It isn't as bad a case as she had last year (when we couldn't find a vet), but when she started shedding some internal tissue (irregular pieces of what look like shedding skin, some were blood spotted), I decided she had better see a vet if we could find one. I really don't want to go through what we went through last year! All the 'books' say--see a vet. Her temp is normal (100.3), she is eating and drinking normally, she is still pooping out berries, she kidded on March 27th with a buckling and a doeling. We pulled her kids on Monday morning--one has taken to the bottle without a problem, the other found a 'new mom' in the herd. (We've got one Saanen who will adopt anyone.)

The vet charged $160 to tell us to
1) dry her off
2) don't breed her again (he was wondering why anyone would want goats in the first place--nice man but the wrong vet for us!)
3) gave us Penject+B to inject IM or SQ 3ml/day
4) don't worry about milking her out (see #1)

So.... we are giving her the Penject+B IM (since the books and other info say IM not SQ) as well as milking her out a number of times each day (Mon and Tue we milked her out every hour from 8:00 am-10:00 pm) Her milk does look better today--fewer clumps and not as much blood, so we'll probably milk her out every 3 hours today unless things look worse at one of the milkings. We also massage her udder to make sure we get out as much milk as possible.

She managed to get the milk bucket a few times on Tuesday and drank a bunch of her own milk. When I found this article:
(http://www.u-sayranch.com/goats/ramsay/natural_ways_treating_mastitis.html)
I wasn't as worried. Maybe the milk will help.

After reading Willi and Barbara's posts from last year (http://tech.groups.yahoo.com/group/SaanenTalk/message/34152), we decided to not try the hydrogen peroxide infusion (I don't think her mastitis is that bad at this point). She doesn't seem to be in pain (and I doubt the vet would give us banamine anyway) so we aren't giving her Banamine. She was copper bolused 2 weeks ago, so I don't think we'll add more copper at this point. Hubby is a chemist, so he is mixing up some chelated selenium today for her in the lab, it will be fed (or drenched) orally and hopefully he can find some good info here (http://jds.fass.org/cgi/content/full/90/5/2350) on dosages. I'm not sure if the Calcium is necessary, but I can certainly mix up some for her (I've got some food grade, powdered calcium from hubby's lab and the doe will eat anything I mix with a little molasses and make a sandwich out of).

Since she is on Penject+B we are giving her 5 g of Probios daily, too, although that wasn't on the list of things from Barbara and Willi--it seems like a good idea. I also read about giving 1 gram of Vitamin C per day. So we made a sandwich last night for her and another this morning. We'll keep that up for 10 days as well.

Another tip I was given from SaanenTalk was to dry treat her when we dry her off. We will give that a try and see if we can avoid another bout of mastitis with this doe next year.

The funny thing was that the vet sent hubby and Vet2Be up to the front about 4 times (I was working and couldn't be there). When they told me that my first thought was, "He doesn't have much of an idea about what he is doing!" That was the feeling hubby and son got :o) So we won't be going to this vet again (nice guy--just not a goat vet). I know there is a good goat/sheep vet 2 hours south of here--I was just trying to avoid the drive. Another clue that this is not the vet for us: he told Vet2B to give the shots in the doe's rump--a big no-no as there is a chance of nerve damage to any goat in that area and carcass damage if you have meat goats. 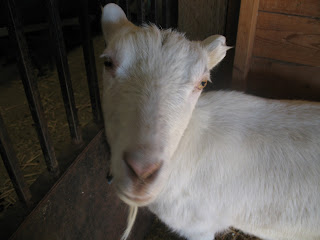 Glacier, the doe with mastitis
If you are interested in raising sheep and goat, our favorite reference book is Small Ruminant Production Medicine and Management (Sheep and Goats). You can find it at Infovets.com.
Posted by TJ at 12:04 PM

Hi.
I realise that this is a very old post, but just wondering if you've come across Pat Coleby's work in your travels.
I've found that reducing feed protein levels and having dolomitic limestone (dolomite) available ad-lib has greatly reduced frequency and severity of Mastitis is our herd of Milking Goats.
Best wishes.
Rob

Yes, I've run across Pat Coleby's ideas. We were able to trace both the polio and mastitis, along with a few other problems, to a copper/cobalt/selenium deficiency. Too much grain and protein was one of our thoughts, but it turns out we had a mineral deficiency. We haven't had a case of mastitis, polio, retained placentas or bald noses in about 18 months, yay!