Photos from the Farm #17

It was so much fun to visit you in person last week! I wish there had been more time for your questions.

If I didn't have a chance to answer your question I hope you will write it down in your best handwriting and I'll answer it here on the blog. 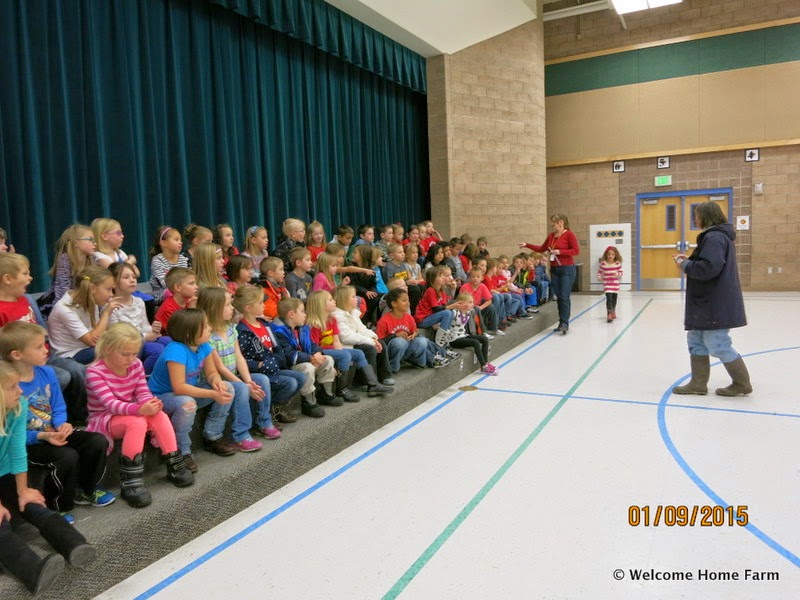 Ducklings don't develop (grow) that oil gland until they are about 6 weeks old. When they are about six weeks old they will start preening (spreading water-resistant oil) on their feathers. Then they can swim and float on the water if they want to.

You can try an experiment: put a little bit of oil in a cup of water. What happens to the oil?


It is always easier to trim hooves after we have had some rain. The goats don't mind walking around on the damp ground and that softens their hooves. Your nails are softer after you get out of the bath or the shower.
I hope your nails never get as dirty as goat hooves do!


If you don't know what parallel means, look at the red lines on the back hoof in the photo. If I keep drawing those lines they will never touch each other. Neither line is tilted towards the ceiling or the floor.

Did you know that farmers have to know math? We do! We need to know all sorts of math or we can't put up fences or plant gardens or know how to properly feed an animal or how to properly care for a sick animal.

Are you smarter than a goat? Do you wear your coat outside?

Chickens are bullies, and they are stupid! Hmmmmm..... do you think all bullies are stupid? I wonder about that.

The new chickens stayed in the back for 3 nights. Now the old chickens think they have always been part of the flock. Everyone gets along now!

Next week I will show you what we have to do with Scout. He is a good dog, but he's not very smart sometimes. He loves to play and work and be outside. He gets so excited to do those things that he doesn't always eat.